The Creative Economy: It's Bigger than You Think.

How Will Your Community Compete?

Communities are experiencing unprecedented economic disruptions as interconnected digital technologies proliferate and efficiencies in global markets expands. Human creativity and ingenuity have never been more essential to the economic well being of communities. Demand for creative goods and services – and the creative economy in general – is growing by leaps and bounds. Creative startups are increasingly leading economic opportunities for regions. According to the US Bureau of Economic Analysis (BEA), the creative/copyright industries’ 2011 contributions to the US gross domestic product was nearly $1 trillion USD. BEA estimates that $504billion of our nation’s GDP stem from arts and culture, a subset of the creative industries. 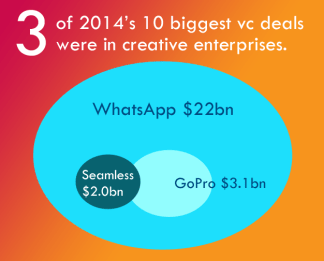 2014 data show that three of the top VC-backed companies in terms of ROI were in the creative industries: advertising (WhatsApp), culinary (Seamless), and photography (GoPro).

The question is, how will communities be competitive in this shifting global economy?

In New Mexico we are fortunate to be starting from an economy that never really developed.  (NM is perennially ranked as poorest or next to poorest state in US.) So, instead of having to throw out the old, we have to start from step 1. Which is turning out to be easier than starting from Step – 1 which is where folks in the Rust Belt seem to starting from.  But some communities are adapting faster than others.  Why is that? What do they do or know? Who are their leaders? What are examples of communities successfully shifting to the creative and innovation economy – away from a manufacturing economy?  I’m looking for great examples – send me your ideas and examples!

JOIN 6,000+ PEOPLE WHO RECEIVE THE LATEST NEWS, IDEAS, AND TIPS FROM CREATIVE STARTUPS

When you visit any web site, it may store or retrieve information on your browser, mostly in the form of cookies. This information might be about you, your preferences, or used to make the site work as you expect it to. The information does not usually identify you directly, but it can give you a more personalized web experience. You can choose not to allow some types of cookies. For information, please see our privacy policy.